Anne-Marie Mayer is a nutrition consultant from the United Kingdom. She has extensive experience on links between agriculture and nutrition, particularly in Global South. So, the majority of her work lies in international development. Anne-Marie was invited to the 2018 Forum to speak about nutritional quality of food and also about permaculture, another topic she has been working on for many years. 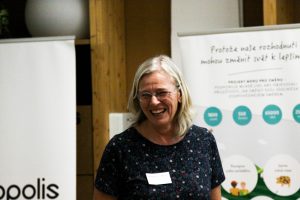 The first workshop Anne-Marie led at the Forum was oriented on the nutritional quality of food. She used her experience from a research she was working on, studying the diminishing content of nutrients in fruits and vegetables during the period of agriculture intensification. The research was focused mainly on historical differences, comparing the old and the new data. She discovered that in long term organic farming there is a better nutrient profile in the soil and then also a better nutrient profile in the food. But as she says, it’s difficult to compare and the data is quite lacking. Except the nutritional differences, they were also exploring at the workshop the natural understanding about the nutritional quality of food based on the colour and form – a topic that could be really interesting also for children at school, to learn more about nutrition in a natural way. 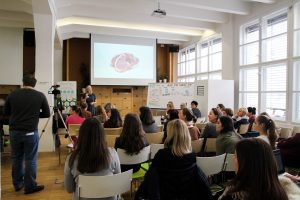 The second workshop session was about examples how permaculture could be applied for nutrition. Anne-Marie used one specific example from her work in Malawi. In this project she was educating children about nutrition, making sure they had healthy school lunch and looking on various health aspects, giving supplements if necessary, providing toilets etc. As she says, all these things are linked to nutrition at the end and even a simple intervention can make a huge difference. At second part of the workshop the participating teachers were reflecting on their own teaching environments and whether they could use the new experience in their own schools.

And what are the currentt problems of the (un)sustainable food system according to Anne-Marie Mayer?

„On the political level I would say that one of the biggest problems is the vested interest. From the point of view of nutrition and health, it’s mainly the influence of pharmaceutical industry. And on the agriculture side it’s the influence of agrochemical industries and their push towards high yielding, high input agriculture systems. Which tend to be supported through policy, rather then the more sustainable, agroecological approach, that supports small farmers, and particularly, women farmers. And this is only one example of many problems in the current food system. Because in a global context, women farmers aren’t  supported nearly as much as male farmers. And it’s the women who are growing food for the home consumption.“ 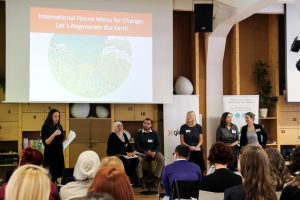 „On the personal level, I think not wasting food would be helpful for the whole food system. That would be one simple thing. If people don’t waste food and don’t buy more than they can consume. And also practicing composting and trying to grow at least some food for themselves and their families. That would be a nice and helpful thing to do as well.“