What do people often throw away? What do they waste? What could we find in their bins? And mainly – why? These and other crucial questions were discussed by kids from the Czech Primary school in Dubá. Then, they went to the streets of Dubá, asked around, collected their old bread, and after that came back to school to bake a delicious cake.

The kids and teachers from Dubá  took part in a one-day project called „Stop wasting food!“ First, they discussed this issue together, wondering why people throw away and waste so much food, and after, they tried to find out what could be done to improve this situation. The kids also talked about their own experience at home.

After this interesting discussion, their teacher provided them with real data and information which was indeed horrible and shocking for them. They were then given a task to write down this information. They worked with tablets and found many more interesting but alarming facts about food waste. For example, the kids noted the following facts:

–       The most wasted type of food is bread, followed by vegetables and fruit.

–       Every person in the Czech Republic wastes 70 kilogrammes of food each year on average. 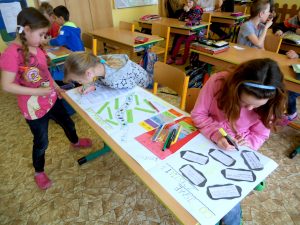 Let´s go to streets and talk to people!

So, people in the Czech Republic and the rest of Europe throw away and waste much less food than in the the United States. However, the numbers and statistics show us that we should try to improve and reverse this situation. Almost every day, we hear or read about hunger in the world, and how millions of people are dying because of starvation, and after that we throw away our leftovers, bread, vegetables, fruit, etc. The kids from Dubá understood this serious problem, and so, they decided to go to the streets and talk to people. 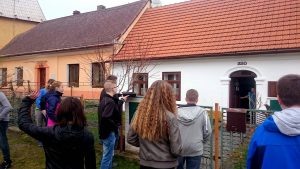 The pupils prepared a questionnaire and divided themselves into groups. Every group went to a different part of Dubá, and talked to its residents, at home, at restaurants, or in the streets. They informed them about the important things they found out in their research on food waste, and then they asked them the questions they prepared. They found out that, for example, the elderly people in Dubá try to collect leftovers to feed their animals, and by doing so they do not waste as much food.

The kids decided to focus on the most wasted food, bread. They wanted to know how much bread the people in Dubá normally waste and they were really determined to collect the old bread and reuse it.

After their work in the field, the kids went back to school to demonstrate that the old bread was still edible and could be very tasty. Most of the residents of Dubá were hesitant about this task. They were quite sure that the old bread should be thrown away because it was no longer usable. However, they were very surprised when, after some time, the kids returned and offered them very delicious sweet cake. So, what was the cake made from? The old bread which is normally thrown away… 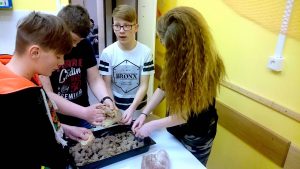 The kids really enjoyed the whole activity. They appreciated the teamwork and communication with people. They mainly understood that food waste is an important issue which should be discussed and tackled. So, if you have some old bread, don’t hesitate to try their recipe!