It was about the middle of the afternoon when the first drop of rain fell on the cheek of Tereza.

A flash of light appeared in the grey sky. Tereza and Jana started to pedal faster on the muddy path as the rain was now pouring down. Their bikes were sliding on the wet soil. ”Look! Let’s head over there!” Jana was pointing in direction of a white building after the turn of the path. A few meters from the building, they could smell the odour of wet straw and understood that the place was a farm. They passed an open fence, dropped their bikes on the ground, and pushed open the first door they could reach. The air was warm inside and the ground was soft. When their eyes got used to the darkness, they wondered if they were dreaming…

“Is it a sheep, or… a pig?” mumbled Jana.   A few seconds later, the hairy animal, surprised by the two intruders, made some sound that left no  doubt…

A second later, someone entered the stable. It was a tall woman, with a raincoat, who was smiling at them.

“Hello, young ladies. I saw you coming in, so I thought I would offer you some hot tea while waiting for the rain to stop. Come with me to the kitchen.” Jana and Tereza gladly accepted the invitation. The girls entered the kitchen, where smells of herbal tea were mixed with something baking in the oven. They sat down quietly, both hoping to learn more about the mysterious pig that looked like a sheep.

“You must have been a bit surprised to meet Ruby,” said the lady farmer.

“Ruby? That’s the name of the pig?” asked Tereza.

“Yes, it is,” smiled the lady. Ruby is a pig from a breed named Mangalitsa. As it mostly lives outside, it gets woolly like a sheep, especially during winter. This breed was under threat of extinction but has been saved. That’s because in Hungary, they started to seriously raise more of them again.”

“Extinction? You mean that it could disappear forever? How is that possible?” 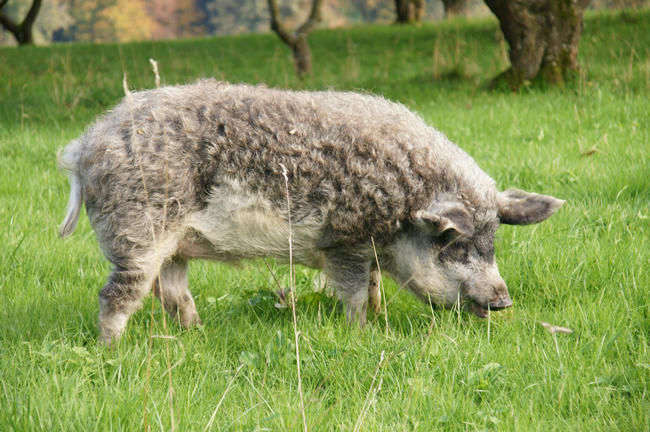 A Mangalitsa pig (Photo: By Nienetwiler (Own work) [CC BY 2.5 ch (http://creativecommons.org/licenses/by/2.5/ch/deed.en)], via Wikimedia Commons)

With more standardized foods, we are losing varieties

When we enter a supermarket, we are surrounded by full shelves of all kinds of food, sometimes coming from faraway countries. It creates the impression that there is a large choice and an ever increasing diversity of available food; but appearances can be misleading.

The United Nations agency on food issues, called the Food and Agriculture Organization (FAO) explains that although 7,000 species of plants have been cultivated in human history, presently, 75 percent of the world’s food is generated from only 12 plants and five animal species. Four crop species (rice, wheat, maize and potato) are responsible for more than 60% of human energy intake. Due to people’s dependency on this relatively small number of crops for their food, it is crucial to maintain high genetic diversity within these crops through the preservation of varieties. But the FAO warns about the serious problem that for each crop species (for instance wheat), the world has already lost a great number of varieties (wheat has thousands of different varieties, but we plant fewer and fewer of them).

Over 100 years (1900-2000), 75 percent of agrobiodiversity was lost because farmers worldwide have abandoned numerous open-pollinated varieties. Due to a move to industrial farming methods and also due to complex laws, farmers have turned increasingly towards commercial hybrid varieties. These have helped achieve the highest yields, uniform size, appearance and taste. They also met the demand of consumers who ask for cheap food of a consistent quality. But the downside is that farmers have been growing considerably less diverse wheat, tomato and potato varieties, and this loss weakens our capacity to grow enough food in the future. Learn in the following story why preserving agrobiodiversity is important.

As we’ve come to depend on a small number of commercial varieties of fruits and vegetables, thousands of traditional (also called heirloom) varieties have disappeared. It’s hard to know exactly how many have been lost over the past century, but a study conducted in 1983 by the Rural Advancement Foundation International in USA gave a clue as to the scope of the problem. The survey, which included 66 crops, found that about 93 percent of the varieties in the USA had gone extinct. More up-to-date studies are needed. Source: National Geographic, http://ngm.nationalgeographic.com/2011/07/food-ark/food-variety-graphic